Publishing our CellCast Widget for iPad 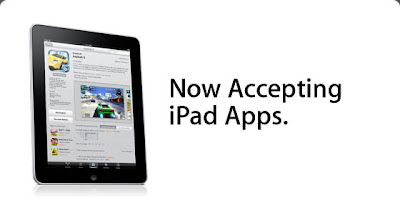 The rush has been on this week as our development team worked to design a new version of our CellCast Widget specifically for Apple's upcoming and much anticipated iPad tablet device. And while we've had a CellCast Widget for iPhone and iPod touch devices for about a year a half, the new iPad platform drove some interesting changes and helped us evolve our offering for this next generation mobile learning device.
When Steve Jobs first introduced the  iPad back in late January, he stated that existing Apple iPhone apps and games would work fine on the new platform and, generally speaking, he was correct. In fact, we only had to modify a select number of functions and application calls to ensure our standard widget would work on the new devices when they shipped.
However, to really take advantage of some new features and a vastly improved 1024x768 display, we decided a full rewrite was in order so we've spent much of the last 2 weeks re-factoring our original iPhone code base to create a new iPad-specific version of CellCast.  Apple provided a strong "call to action" about a week ago with an email to all developers stating we had until Saturday, March 27th to submit our iPad applications -- developed using the latest Xcode v3.2 beta 5 development environment -- and that if things checked out, our application would be included as part of the official iTunes App Store offering for iPad on April 3rd, the official launch day!  Keep in mind we're developing something and checking everything using only Apple's simulator (not a real device) so our first chance to see it working for real will also be on/after launch day!  We have a high level of confidence it will work/run without issue given Apple's Xcode simulators are very strong and have always been quite representative of the way our apps actually perform in real life.
So, attached below are the first public glimpses of our CellCast Widget for iPad which will hopefully ship next Saturday with the first round of devices to hit the street. We are excited about how our partners and customers will use their new iPad devices to delivery on-the-go training to their enterprise workers too!  Thanks to our friends at 50 Lessons and Element K for use of their awesome mobile-friendly content from our CellCast Mobile Library that was included in the demo submission to Apple.
Never a dull day in the world of mobile learning!
Figure 1 (below) - Main Interface with menu block and customer-specific branding 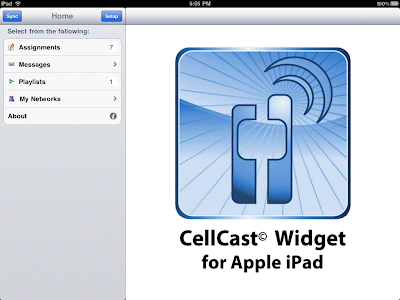 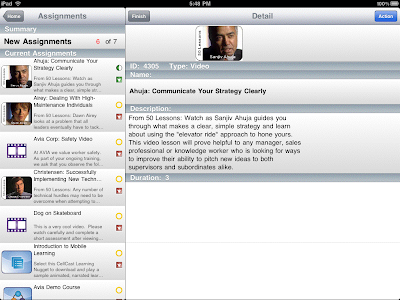 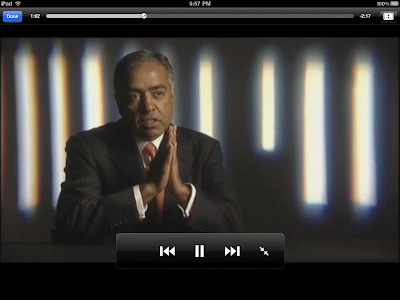 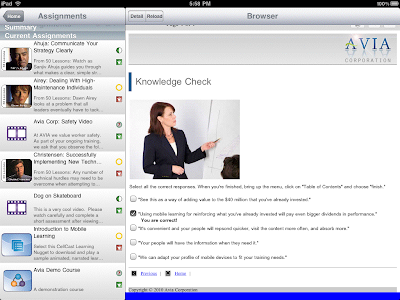 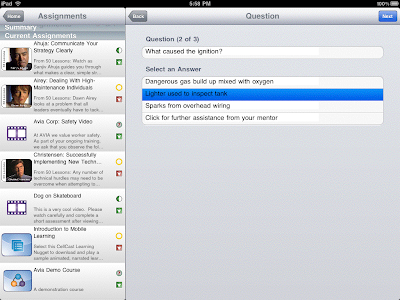 Posted by Robert Gadd at 5:22 PM No comments: