Oh what a difference a few years makes, eh?

Our team has been involved in mobile learning for enterprise customers for almost a decade now on devices spanning basic feature phones in the beginning (think old Nokia handsets with voice only service) through simple smartphone devices (remember Windows Mobile?) popular four or five years ago. The next few years of the enterprise mLearning landscape were focused on supporting mobile workers equipped with nearly ubiquitous BlackBerry smartphones from Research in Motion; sure, there were some new Apple iPhones out there and Google had just introduced Android into the market but real companies needed real devices with real security so most organizations sought to leverage those BlackBerry populations for their mobile learning needs.

What transpired next will become fodder for many future business case studies as the venerable RIM/BlackBerry began to lose market share to more sexy iOS and Android-based alternatives due to what the market perceived as a lack of innovation coming from the folks in Waterloo.  Enterprise IT organizations started thinking about devices that were fun to use, had more capable features and better web browsers, and provided extensive app ecosystems to meet address unique business requirements. Much of the pressure on these teams to start considering non-RIM hardware was driven at the grassroots level via the consumer-oriented adoption of Apple iPhones and iPads and Motorola Droids that began to sweep through the market. When the sales executive up in the corner office demands she needs her new personal handset or tablet working with corporate email server and connected to the office Wi-Fi network, yesterday’s mobile device risks were suddenly evaluated under different light thus driving a wedge into the restrictive mobile device policies enforced by many IT security teams.

None of these facts was lost on RIM, their ecosystem or their investors for that matter. Over the past year, RIM (now officially renamed BlackBerry in both name and core product) has transformed the company’s vision and strategy in the mobile computing market to dramatically transform both their product hardware and the underlying mobile device software with differentiated, next generation offerings that leverage past strengths as well as support future ones. All this culminated today with the official launch of the BlackBerry 10 operating system and announcement of the first two of six planned handsets – the touchscreen BlackBerry Z10 and the upcoming QWERTY-based BlackBerry Q10. These devices are launching globally in the coming weeks/months and are sure to not just energize the CrackBerry faithful with long-awaited features but also begin to rebuild their base with new customers who feel the current crop of mobile offerings leaves them wanting something different and more secure.

Our team has had the good fortunate to work on project to bring our CellCast Solution platform for enterprise mobile learning to the BlackBerry 10 device platform and we officially launched our new offering in the BlackBerry App World earlier this month in support of today’s product introduction (along with 70K other applications). The core functionality of our new BB10 app is virtually identical feature-wise to all our other native smartphone, tablet and eBook reader apps in other popular App stores but what sets this new app apart from its siblings is the “wow factor” users gain from BlackBerry’s new Cascades-based development environment and interface. The level of what’s possible has easily changed by an order of magnitude from the current BlackBerry/BBOS7 operating environment versus this new realm. 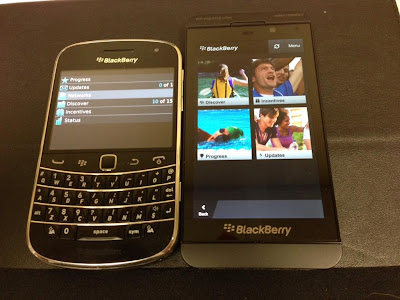 As evidence, the picture above shows our current BlackBerry 7 CellCast app next to our new BlackBerry 10 CellCast app each configured with the same selection of features and options. The graphical interface is more engaging and simplified – hallmarks of the new “less is more” mobile design doctrine my friends like RJ Jacquez (@rjacquez) and Mayra Aixa Villar (@mayraAixaVillar) both espouse. Both apps allow users to access training content, complete surveys, interact within defined social networks, and actively participate in game-enabled learning environments and check their status on leader boards – the BB10 just makes all those formal and informal learning interactions more enjoyable.

Overall, the “look and feel” is truly wonderful as you’ll see in the short promo video included below that I produced using another excellent feature found on the BlackBerry 10 that’s not found on many other smartphone handsets – HDMI video output that can be recorded by an external video source. Add to that some other compelling BB10-only features like BlackBerry Hub, BlackBerry Balance and the new video-capable BlackBerry Messenger/BBM with cool screen sharing capabilities to amass even more reasons (beyond control and tight security) why enterprises are going include BlackBerry 10 solutions in their mobile computing universes. BlackBerry 10 will definitely improve the mobile learning experience for all who adopt and use one.

Finally, my thanks to our whole team who worked diligently to design, create, test and deploy our next generation app for all our BlackBerry 10 users, partners and customers – you make me proud! :)
Posted by Robert Gadd at 3:46 PM

Thanks for leaving your comments. I will try and respond directly to any positive ideas or active discourse as soon as possible.